Roundup Facing its Judges : the DVD 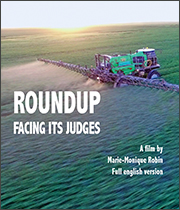 After her best-selling film and book   “The World according to Monsanto”, award-winning journalist  Marie-Monique Robin presents her new documentary, “Roundup facing its judges”, on the use of glyphosate-based herbicides around the globe. In it, she unravels the workings of one of the greatest environmental and health scandals in modern history.

“Roundup facing its Judges” is the fruit of an exceptional investigation on a subject that concerns us all, because glyphosate is everywhere: in the water, in the air, in the rain, in the soil and in food. The documentary’s central thread is the Monsanto International Tribunal, held in the Hague in October 2016.

6 extras:
“When eating becomes hell”: Zen Honeycutt, the founder and director of Moms across America, meets mothers in Chicago.
“Fatty-liver disease”: PhD. Michael Antoniou, researcher at King's College London School of Medicine, speaks about his peer review studies showing that Roundup causes massive kidney and liver damage at low doses.
“Outcry over Glyphosate”: interview with Stephanie Seneff, a senior research scientist at the Massachusetts Institute of Technology on the link between glyphosate and diseases like autism.
“Nature’s revenge”: PhD Don Huber and agronomist Robert Streit explain how weeds became resistant to Roundup in Iowa.
“Death haunts the fields”: PhD Don Huber holds a conference on “ The impact of GMOs and glyphosate on soils, crops, animals, humans and the ecology ».
“Danger in Bambiland”:  Wildlife Researcher Judy Hoy has been documenting diseases and birth defects in wildlife for 50 years.